Investors’ heads are spinning because of a slew of conflicting headlines related to the U.S.-China trade talks.

Dow Jones Industrial Average futures dropped more than 300 points overnight at one point. By Thursday morning, however, the Dow was up more than 150 points.

Stocks jumped Thursday morning after President Donald Trump said in a tweet: “Big day of negotiations with China. They want to make a deal, but do I? I meet with the Vice Premier tomorrow at The White House.”

27.7K people are talking about this

Donald J. Trump✔@realDonaldTrump
​
Big day of negotiations with China. They want to make a deal, but do I? I meet with the Vice Premier tomorrow at The White House.

The sharp moves came as Wall Street braced for the latest round of U.S.-China trade talks, which were set to begin Thursday. What set off the volatile swings overnight was a report saying the much-anticipated negotiations might end earlier than expected. 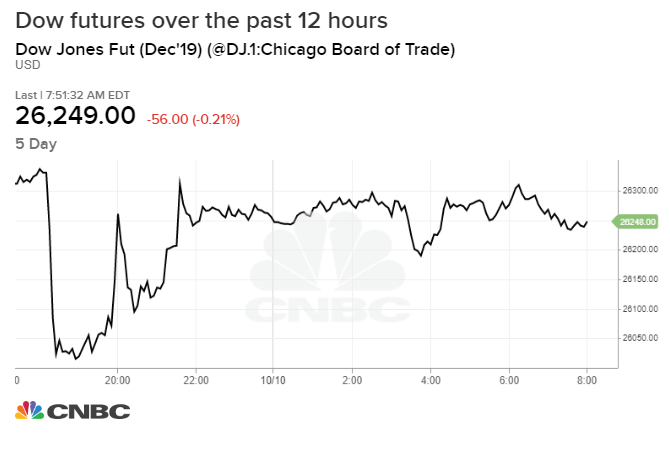 The South China Morning Post initially reported Wednesday night that the high-level talks would only take place Thursday. Originally the report said Chinese Vice Premier Liu He and the rest of China’s delegation were scheduled to leave Thursday night instead of the expected departure Friday.

Harness the Rarest & Most Explosive events in the market…
High Velocity Alignments!

When these ‘High Velocity Alignments’ fire…you have to act fast!

​This FREE Training Reveals Exactly How You Can Profit From These Too!

However, a White House spokesman later told CNBC’s Kayla Tausche that the South China Morning Post’s initial report was inaccurate. “We are not aware of a change in the Vice Premier’s travel plans at this time.” A senior White House official also told Tausche that Liu was still scheduled to depart Friday evening.

The White House denial helped futures recover from those losses. However, a principal in the negotiations told CNBC that the schedule around the U.S.-China trade talks had indeed become “fluid,” with Friday’s session being an “open question.” The source said one possibility was for Vice Minister Liao Min to stay in Washington through Friday while Liu left early. Another possibility is the high-level negotiations end Thursday after just one day.

The headline deluge did not end there. Bloomberg News later reported the U.S. was thinking about suspending a tariff increase scheduled for next week in exchange for a currency pact. The report said this is something the U.S. and China were close to agreeing on in previous talks.

The New York Times also said the Trump administration plans to allow the sale of some supplies to Huawei, a giant telecom company in China. The administration restricted sales to Huawei in May, citing concerns over national security. Stock futures clawed back to trade off their lows following these reports.

“We expect the WH to announce that progress has been made sufficient to put the Oct 15 tariff on ‘indefinite hold,’” said Donald Straszheim, head of China research at Evercore ISI, in a note. “If we are correct on these delays, the tariff war has already hit its peak intensity. That’s a plus. Both sides we believe want to turn down the heat. Tariffs hurt everybody.”

Have a wonderful day and I hope this helps.