For investors fearful of more trade-war bombshells, the worst is over and it’s go time, according to J.P. Morgan.

That’s the joint view of Marko Kolanovic, the bank’s quant guru who’s been dissecting the market’s every twist and turn, and Dubravko Lakos-Bujas, J.P. Morgan’s chief U.S. equity strategist who takes a fundamental approach. The two are encouraging investors to seize the buying opportunity after the trade-war induced sell-off.

“We do think that after a short period of stabilization, markets will likely regain previous highs, and hence we see this sell-off as a medium-term buying opportunity,” Kolanovic and Lakos-Bujas said in a note to clients Thursday afternoon.

The market already has rebounded after suffering its worst day of the year on Monday after China allowed it currency to drop against the U.S. dollar. Many interpreted the move as retaliation against President Donald Trump’s surprise tariff threat. The sell-off came just a couple sessions after the S&P 500 hit an all-time high of 3,025.86 on July 26. The benchmark notched a third straight day of gains on Thursday, erasing all the losses this week. 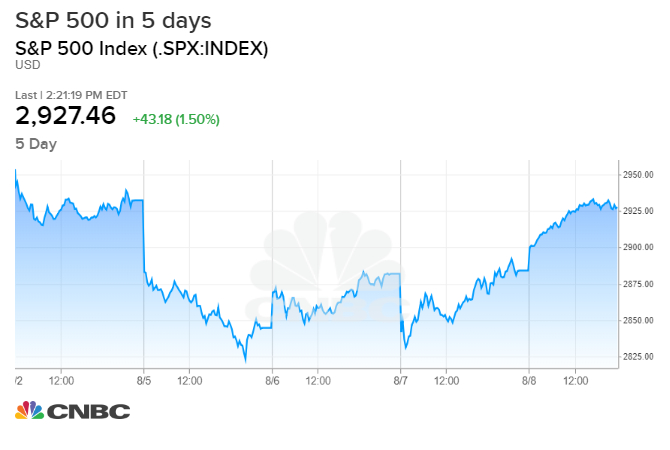 “The risk to this view is further uncontrolled escalation of trade tensions, which we see as a less likely scenario, given that we’re approaching an election year and a trade-war-induced recession would greatly reduce the probability of the president’s re-election,” the strategists said.

From wage growth to better-than-expected earnings to global central banks’ support, the stage is set for the market to go higher from a fundamental standpoint, according to J.P. Morgan strategists.

“The current macro environment is far from perfect, but macro fundamentals likely justify higher equity prices,” they said. “Services and new economy sectors have held up relatively better. ... Guidance on most important macro companies was better than expected.”

Second-quarter results have been better than feared as 76% of S&P 500 companies have reported a positive earnings surprise, according to FactSet.

“With central banks globally in easing mode, cash is becoming less rewarding leaving equities as potentially the only alternative with an attractive yield and long-term growth potential,” Kolanovic and Lakos-Bujas said

Looking at traders’ positioning, the market is unlikely to suffer another exodus from hedge funds, risk parity funds and other players in the near term, J.P. Morgan said.

Traders fled the market on Monday as the escalated trade war jolted market volatility, but chances are low they will get another sell signal going forward as the trigger level is relatively far from the current state, the strategists pointed out.

Have a successful day!