The 100 days since the stocks peaked on Feb. 19 have been among the most dramatic and destabilizing in market history.

The fastest-ever 35% collapse from a record high followed by one of the strongest and most relentless rebound rallies in decades. The violence of the descent, on an unprecedented enforced economic halt and incipient credit panic, was hard to escape. And the ferocity of the run higher difficult for many wary investors to believe or ride.

Now that the rally has reached what could be critical levels just as the economy reopens, it makes sense to interrogate the market for clues of its intentions from here.

Is the recovery rally looking vulnerable?

Perhaps in spots it is. Most of the potential points of weakness fit into the category of short-term overheated conditions.

The S&P 500 at last week’s close of 3044 had recouped 70% of the total losses in the post-February crash, a remarkable move that also slung the index above its 200-day moving average at the 3000 level.

While no automatic restraint on further progress, the 200-day average has acted as a bit of a stall-out area after previous important market bottoms. Even in the pronounced V-shaped recovery from late-2018 saw a quick slippage back to this level for a second touch before carrying higher.

Late last week some 96% of S&P 500 stocks exceeded their 50-day average – about as high as this measure gets.

While it suggests the tape is overbought, Katie Stockton of Fairlead Strategies points out the market only hits such a state in powerful uptrends and meaningful pullbacks aren’t usually immediate.

Options traders are getting quite aggressive in their bullish bets again, with the 10-day average of downside-put to upside-call volume near extreme lows seen in January of this year and January 2018, both near market peaks.

But bearish patterns have failed to take hold the past two months, with downside momentum lacking and dips limited to around 5%.

Are investors still fighting this rally?

Traditional retail investors and many institutional fund managers have been cautious and confounded by the persistence and magnitude of this rally. Measures of retail fund flows, individual-investor surveys and fund cash levels all continue to reflect a lack of belief in the market.

Systematic hedge-fund positioning was quite defensive and by most measures these tactical players have begun ramping up their equity exposure.

Wall Street strategists as a group are muted in their market view. The average sell-side S&P 500 price target is 3067 – about 1% above last week’s closing level and well below the typical forecasted gain of 5-10%.

For sure, an open-ended bullish scenario does not enjoy popularity. Suggest that the Fed and Congress have pre-emptively short-circuited a recessionary feedback loop, stimulus will be enough to bridge consumers and businesses, equity valuations are justified by ultra-low interest rates and companies will wring huge efficiencies out of this turmoil, and expect to be shouted down.

Set against all the evidence of caution, though, are the aforementioned overheated options activity and the evident surge in small-investor speculation and rampant account openings at online brokerage firms.

It’s still possible to suggest positioning in aggregate is restrained and the so-called pain trade remains higher for stocks, but this case is not as strong as it was a few weeks ago.

Exploit a Step-by-Step BLUEPRINT in 1 Hour or LESS a Day ​& EARN Consistent Daily Income from the Most Predictable & Profitable Market on the Planet.

Discover this Simple, 4-Step Process, Fully Disclosed BLUEPRINT for yourself.

What to make of the vaunted rotation into cheaper cyclical stocks?

A couple days of dramatic outperformance by smaller, beaten-down, economically sensitive stocks last week was roundly embraced as a potential shift away from the same old growth-stock leadership and a sign the market was handicapping a smoother economic revival.

It came as if on cue, with many investors citing the record spread between growth and value performance and widespread complaints that the market was over-reliant on the biggest five stocks, representing 21% of the S&P 500.

It also came as some of the Big Five have not only held up well but have expanded their valuations to record heights. Microsoft, Apple and Alphabet are all either at all-time or multi-year highs in forward price/earnings multiple.

In general, this broadening of the market is a positive. Ned Davis Research says cyclical outperformance following a period of extreme volatility tends to persist for several months.

At the same time, when the longtime market leaders start to tire and traders begin grabbing for the ragged laggards, it often marks a mature phase of a rally is underway. Jurrien Timmer, head of macro research at Fidelity, points out we’ve seen value rotations near the end of the past three months, hinting at a month-end rebalancing effect.

Why aren’t Treasury yields higher or the VIX lower?

Arguably, the inability of the 10-year Treasury yield to stay above 0.7% says bond investors are withholding their endorsement of the equity market’s brighter outlook. Perhaps. And new lows in yields would not likely be welcomed by the equity crowd.

The distant parts of the Treasury yield curve are quite steep, with the 30-year above 1.4%, a positive macro signal. And credit spreads, while well above February lows, have trended lower in recent weeks. 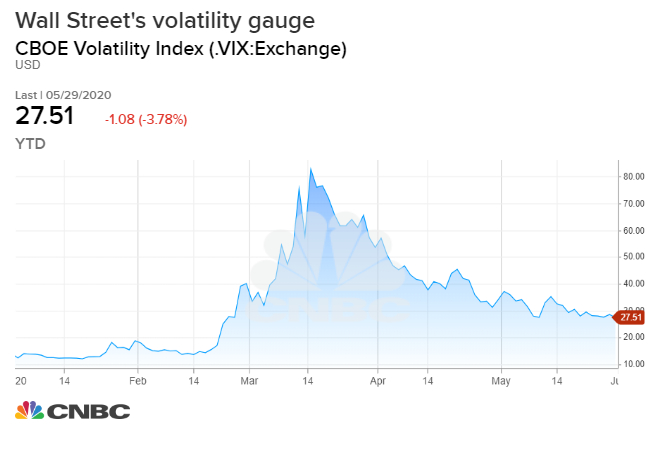 The Volatility Index in the high 20s, even as the S&P has been in rally mode for 60 days, largely reflects the actual daily jumpiness of the market, with the 10-day realized annualized volatility around 20. And trader caution over the extreme economic stress and recent trauma of a massive sell-off is keeping a bid in index options that has VIX somewhat elevated compared to underlying market action.

Because, as these traders must recognize, this market moment prompts more probing questions than clear answers, as Wall Street enters a high-stakes summer.

Have a wonderful day and hope to hear from you soon.