Halftime of the year 2020 is nearly here, and the bulls are tired after mounting a furious comeback to narrow what was a deep deficit after the first quarter.

Fatigue was to be expected after the best 11-week sprint in market history, a gain of 44% in the S&P 500 from March 23 through June 8. And under normal circumstances, stocks giving back one-sixth of a headlong rally, as the index has the past three weeks, would be viewed as utterly routine. And, chances are, it is a routine if uneasy pullback.

But very little about this year has been typical, even if some of the rhythms are familiar. In a normal year, the S&P 500 being down 6% halfway through would have investors asking, “What went wrong?” rather than “Why isn’t it down a lot more?” And in fact it’s not too common for the market to be sitting on such losses near midyear.

Here is the 2020 course of the S&P 500 against the path from the only three years of the past 16 in a similar spot at this point: One year when a grinding bear market turned catastrophic (2008); the next year (2009) when a powerful new bull market began after a climactic March bottom; and a third (2010) when worries about a weak recovery and debt indigestion caused the first gut check of what would become a decade-long uptrend.

Of course, the trajectory of the Covid pandemic and consumer and business adaptations to it will be the main headline driver of how markets act from here.

Key questions for the second half

But in more market-specific terms, the way things go in the coming months comes down to a few key questions:

Trade Your Way To A FORTUNE with BioTech
& Marijuana Stocks!

The powerful March-June rally ticked several of the boxes for those who try to certify important, durable market lows and recoveries. The persistence of the price gains, the amount of losses recouped in a brief time and the rare breadth of the stocks showing extreme momentum had technical strategists calling it an early bull market. The forward returns after the kind of upward lunge we saw into June are, historically, strong over the subsequent six to 12 months, but in the nearer term often lead to retrenchment and choppiness.

Over the past three weeks, the median stock in the market is down some 12% and the core service-sector-revival plays in airlines, hotels, casinos and retailers are off 20% or more from early-June highs as investors have been forced to rethink assumptions for a strong, linear restart of the economy once the Street’s “free pass” neared expiration.

For most of June, cyclically geared sectors have fallen back while defensive growth stocks held things together. And one issue with the idea of a new bull market is, no valuation excesses were wrung out of equities. Truthfully, it was more an event-driven crash mitigated by an overwhelming and rapid policy rescue. Stocks never for a moment got cheap, nor were balance sheets cleansed in any respect.

Right now, the median S&P 500 stock trades at 20-times forward earnings – pricey in the abstract, forgivable if the profit crash is brief, justifiable largely only in comparison with compressed corporate debt costs.

Which brings us to the question about what more can be requested of the mega-cap growth leaders, the five largest now nearly a quarter of the S&P 500. This group was not spared last week’s modest selloff, serial share-price-target increases by analysts on Apple and Amazon failing to generate fresh impetus for investors to commit new money into them aggressively. For now, at least.

While these winning digital platforms have been celebrated as consolidating their dominance in the stay-at-home, on-demand economy, the market mostly treats them as sources of scarce, durable cash flows akin to bonds with upside price potential.

Here is the free-cash-flow yield of the Nasdaq-100 against yields for Treasuries, high-grade corporate debt and the S&P 500 dividend yield over the past five years. All compressed along a similar curve. 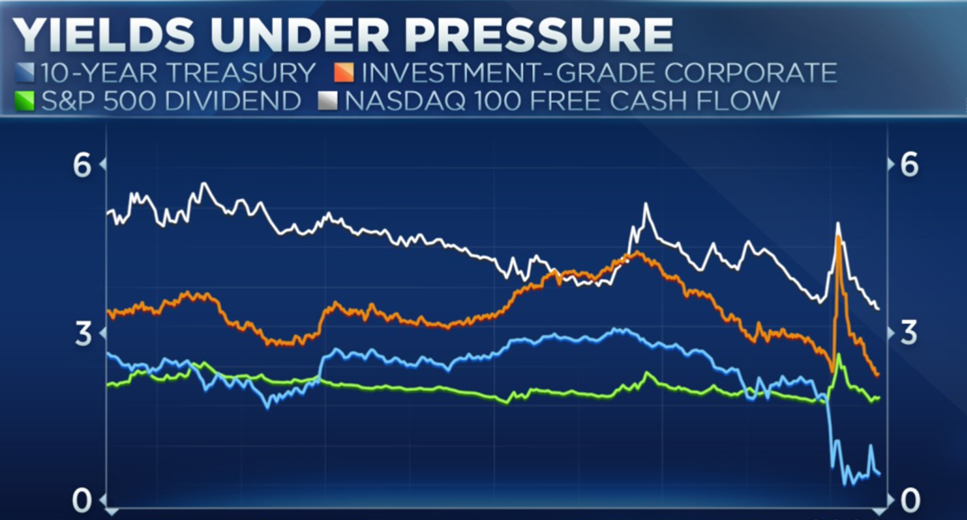 Does this mean this group of stocks would have a hard time holding its value in a higher-bond-yield environment? Does that even seem a scenario worth anticipating at this point?

As for the supply of cash and caution, by most measures it’s ample enough to keep equity pullbacks from growing too deep or disorderly for now. Measures of hedge-fund positioning and traditional institutional exposures suggest professionals are not overcommitted to stocks in leveraged or momentum strategies.

Citi equity strategist Tobias Levkovich Friday released results of a new institutional fund manager survey revealing significant wariness. They maintained cash levels twice the long-term average, most figure 2021 corporate-profit forecasts are too high, only a third think the S&P will be back to early-June levels above 3200 by year end and, when asked whether a 20% market drop or 20% rally was more likely, 70% of managers chose a 20% decline.

This kind of caution is a plus for the market, if not an automatic catalyst for the S&P to snap back up to the June highs - which after all, sit on an island on the charts a 7.5% rally up from here as the days tick down to halftime.

I hope these questions help you in trading. Have a great week!

Coronavirus fears are pushing investors back into stay-at-home trades